Multitasking is one of Jules Arita Koostachin’s natural strengths. While waiting for her car to be fixed, she shares the news of recently submitting the third draft of her dissertation – another in a long list of achievements.

Koostachin is a PhD candidate with the Institute of Gender, Race, Sexuality, and Social Justice at the University of British Columbia. Over time, she has narrowed down her research focus to Indigenous documentary and ways to approach stories, protocols, processes, and working with Indigenous peoples. Complementary to her research, she also holds a degree in Theatre at Concordia University and a Master’s at Ryerson University in Documentary Media. 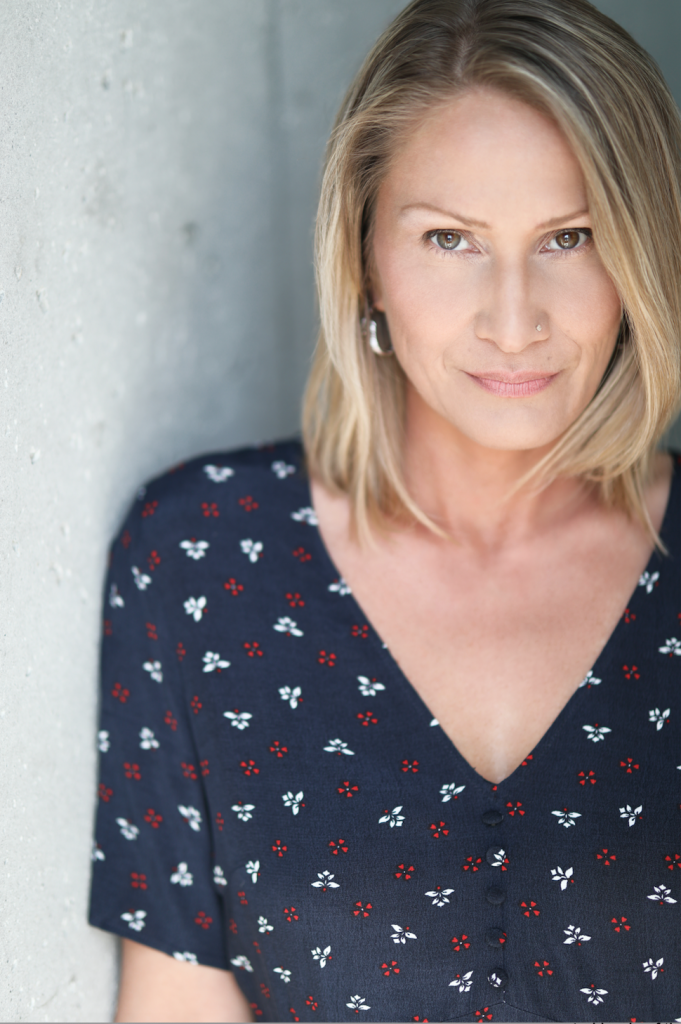 A significant part of her journey is her dedication to supporting women and children, both Indigenous and non-Indigenous. Equipped with a certification in counselling from the Assaulted Women’s and Children’s program at George Brown College, she spent many years in leadership positions before becoming Director and then acting CEO of Anduhyaun, Canada’s oldest emergency shelter for Indigenous women based in Toronto.

“As acting CEO, I oversaw housing, crisis, daycare, and shelter so I had extensive knowledge and experience working with the community,” she said. “After that, when I went back to graduate school, I took a part-time managerial job working with women at risk of incarceration.”

Born in Moose Factory, Ontario, Koostachin is also a band member of Attawapiskat First Nation, the Ancestral lands of the MosKek AsKi (Muskeg land). Her lived experiences as an Indigenous woman, as well as her professional achievements, have made her stand out as an authentic and resilient storyteller in the film and visual arts field.

“All that knowledge, expertise, experience – just working in the community and being Indigenous myself translates well into the arts because I have an understanding and awareness that some others might not have,” she said. “When I first started my PhD, I wanted to focus on Indigenous women and documentary, but it just didn’t seem appropriate from a collective worldview. The community is about the community and not just one gender. I also wanted to acknowledge that there are more than two genders in many Indigenous communities. That’s why instead of focusing on just gender disparity within the arts, what ended up happening is that we had a lot of Indigenous women who were [working] in Indigenous documentary anyway—they were already creating the work.”

With more than just an eye for filmmaking, Koostachin currently applies her visionary skills as an instructor, teaching courses that inform the experiences of Indigenous peoples in Canada and documentary theory and practice at the University of British Columbia, Emily Carr University of Art and Design, Kwantlen Polytechnic University, and Capilano University. But part of what led her down this path spanning academia, research, and industry were the challenges she faced early on.

“There wasn’t a lot of scholarship that I could find. What I found in terms of documentary were a lot of anthropological approaches and I noticed that there were a lot of summaries and critiques of specific work, but what I wasn’t too successful in finding was Indigenous documentary practices,” she said. “I was going down this rabbit hole having to formulate my own scholarship around documentary practices—borrowing from Jo-Ann Archibald and her story work and Linda Tuhiwai Smith on decolonizing methodologies and pulling out work people did in other fields to make it relatable to Indigenous documentary.”

While the acclaimed filmmaker had to rely on limited scholarship back then, Koostachin believes that there will be more conversations and information-sharing, like the existing ImagineNative Screen Protocols document on how to approach communities moving forward. And with the rise and increasing popularity of Indigenous cinema worldwide, some might be unaware of the backlash and discriminatory barriers creators have long faced in this field. As a mother to four sons, daughter, and Indigenous woman, Koostachin has battled through them all.

“It’s funny because I’ve been around for so long, I’m seeing this huge shift now. I wish I started my filmmaking career now and I wish I was 20 now. There were just so many barriers in place, and I’m sure there were way more barriers before me going into the industry. I remember in the ‘80s when I started acting and in the ‘90s when there was so much discrimination,” she said. “It was like nobody’s going to watch your film, nobody’s going to find any film about Indigenous women interesting. Everything that you can think of was a barrier.”

Despite industry barriers, Koostachin continued to balance her passions by working with Indigenous women and children and teaching about the arts and film. This was up until her big break during graduate school. According to Koostachin, her first feature documentary film “Remembering Inninimowin,” which discussed the power of language and her journey of remembering Cree, was quite successful and demonstrated her ability to share complex experiences.

“When I’m teaching, I always tell my students that I create work for the sake of creating something that’s important to me. But when I produce films, I’m not [thinking] this is going to educate non-Indigenous people; that’s not in my mind. What ends up happening though is that it does,” she said. “The fact that I’m an Indigenous storyteller with a very specific lived experience as a single mother living below the poverty line and who put [herself] through school—all those narratives are going to come through in my work anyway. So that becomes an act of resistance, even though I’m not thinking in my head ‘I’m always in response to colonialism’ and ‘I’m going to fight, fight, fight’ because that would be exhausting.”

On the subject of SDG 5 and gender equality, she acknowledges that there are still a lot of existing barriers for Indigenous women and mothers and that calls for more hard work.

“I think it’s specific to individual experiences. Some people might have financial security but may be discriminated against how they are identified. I think that intersectionality plays a part to determine everyone’s own personal journey and [so] there’s still a lot of work to do,” she said.

In fact, another natural strength that Koostachin has is the ability to find gaps. If there’s no film discussing an important issue, she takes the initiative to go out there and make one about it.

“For me, I don’t ask for permission. I say this is a great idea, here’s the gap, this is what I want my kids to see so therefore, it may be important for other Indigenous kids to see. Why don’t we make a movie about it?” Koostachin said of her ability to get things done. “Over the years I’ve gotten really good at producing. I’ve just finished my third CBC documentary on menopause from an Indigenous lens. No one’s ever seen a film like that, but at my age, you know what the gaps are. You [think] ‘How come I’m not seeing anything about this in the media or in film?’ So then I identify the gaps and think this would be a great film because nobody’s talking about it.”

This is also how Koostachin ended up creating a public monument for Shannen Koostachin, the young protagonist of Shannen’s Dream who is known for her advocacy work on equitable access to education for all First Nations children across Canada. She saw a gap in how her young relation was remembered so she and her film colleague, Rick Miller consulted Shannen’s parents, directed a community campaign to raise funding, and built the bronze monument that now stands on the traditional territories of Timiskaming First Nation in New Liskeard, Ontario.

“We documented the process of making that monument—finding the right place, talking to the parents, [choosing] the builder. [We didn’t have] a big budget, but it was something that we felt was important to do,” she said of the film, Butterfly Monument that she co-produced with Miller.

Koostachin has developed a reputation for interweaving emotional storytelling and filmmaking to explore both her own as well as others’ personal experiences and create an honest account that often goes against what is normalized in society.

“For example, the menopause film makes people uncomfortable, but it should be making you uncomfortable because why is it a taboo topic? It’s because there’s not a lot of support services for women over the age of 45 or if there is, we have to pay for it,” she said of her documentary, KaYaMenTa. “The work in itself has its own journey in a way. It does its own work after I birth it. I put it out in the world and people are going to react how they react, right? Some people who watch the film go ‘Why don’t we have enough services for women?’ and then it evolves from there.”

In a nod to the current global discussions on systemic racism, Koostachin encourages more BIPOC and people from different cultural backgrounds to tell stories and push to have conversations against the mainstream.

“I’ve never liked using that word ‘empower.’ I find that, depending on who is using that word, it can take power away from the person themselves. It’s [important] whether or not you are listening. It’s the system that has the issue, not us. Working in the shelter, these women had voices and they voiced their concerns; it was just whether or not anybody was listening to the issue. So who do we hold accountable for these gaps in society?” she asked.

Koostachin emphasizes that we will need to understand the deeply-rooted systemic oppression that has persisted over the years to advance progress on Agenda 2030 and meet the targets for SDG 5.

“I think the onus goes on those who need to listen as opposed to the women themselves to speak louder because so many times we talk, we go to protests, we come together, and fight. And it feels like we’re fighting against people who don’t want to hear so it makes us fight even more. I just think, how do we change the system so they are actively listening? It’s like when people say ‘I’m going to empower an Indigenous person’—well, no you’re not. The reason why you’re doing the work you’re doing is because we’ve been fighting and talking for so long, you finally heard us. I think there’s a lot to be said in terms of the system that’s in place because we’ve been fighting the fight for a long time now. Is there going to be a shift? Definitely, because we have the Me Too movement and all these movements that have happened over the years and people are being held accountable finally. I think that the more that happens, the more we’re going to see change.”

And for people trying to enter the field Koostachin has been navigating for years, she cautions that there is still a lot of progress to be made.

“I just think for women, we’ve just been fighting the fight since we were born. We know what inequality is and we know what gender disparity is from a very young age,” she said. “Again, the onus [has been] on us to continue doing the work and educating if we are up for it, so what I always say is: why don’t other people do the work and educate themselves to take the onus off of us? So keep your head up, stay strong, and find your allies. Hold your allies responsible, hold the men responsible, hold the system responsible and do some self-care, because you’re going to end up completely exhausted.”