BCCIC > What's New > The Wave > One Year Later: Still No Place for People in Article 6 of the Paris Agreement?

What exactly are market mechanisms?

Article 6 of the Paris Agreement, also known as “cooperative approaches”, establishes a framework in which countries can work together to achieve their respective NDC’s (Nationally Determined Contributions). It aims to raise ambition and promote increased mitigation of carbon emissions through market mechanisms (established under Article 6.2 and Article 6.4) and non-market mechanisms (Article 6.8). These approaches will ultimately help contribute to the Paris Agreement’s goal to hold the increase in global average temperature to below 2°C.

Read our previous coverage on Article 6 negotiations at SB-50. 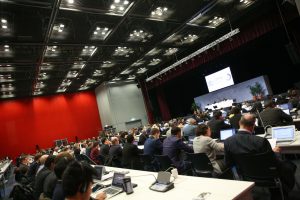 Photo by IISD/ENB | Kiara Worth

One Year Later: Still No Place for People in Article 6 of the Paris Agreement?

In the days leading up to COP 25, 32 countries, including Canada, signed on to the “San Jose Principles” for Article 6, which declared a rights-based vision for the implementation of cooperative approaches. It represented a framework motivated by environmental integrity, while maximizing ambition for emissions mitigation. With momentum gathered at SB-50 and pre-COP, many were cautiously optimistic going into COP 25, as reaching consensus in Article 6 became a major goal for parties this December. This would finalize the last major piece of the rulebook that would operationalize the Paris Agreement.

Progress was slow, and the first week of negotiations in Madrid yielded disappointing results. Though Article 6 saw a significant reduction of brackets in its texts, parties were unable to meet the expectation of finalizing the negotiations. Discussions are expected to continue into future sessions.

What happened at COP 25 for human rights in Article 6 negotiations?

For a conference that dedicated an entire day to promoting human rights awareness in climate change, COP 25 ironically failed to deliver acceptable results for its integration, as these same rights were being disrespected behind negotiation doors. Parties remain divided on where to place specific references to human rights in the text. Many countries supported the inclusion of human rights, and opposed those who were unwilling to specify a mandate for responding to the needs of vulnerable communities.

During discussions under 6.4, parties that were opposed to the inclusion of human rights references echoed their sentiments from SB-50, reiterating that it should be a national prerogative. It was emphasized that guidelines should not be impractical, and that the definition of human rights under “sustainable development” should be interpreted at the national level.

How did the rules change?

It was evident that human rights and accountability mechanisms were relatively low on the priority list for discussion.  In order to move the discussions along, many countries were willing to compromise specific human rights references in the text for more ambiguous ones.

As Article 6.4 discussions moved forward, the final draft completely removed the requirement for countries to “respect, promote and consider their respective obligations on human rights”, which was subsequently replaced by much more ambiguous language and other placeholders. A section with specific mentions of safeguards and limits was also removed from the previous version of the text. The new draft of the text weakly hints at safeguards by emphasizing the need for countries to address “negative social and environmental impacts”, and the term “human rights” has since vanished from the document. In weakening the language outlining Article 6 rules, parties could face much more ambiguous guidelines in addressing human rights considerations under the framework. Ambiguity is a detrimental hurdle in the integration of human rights, because it opens the rulebook up to possible exploitation of loopholes.

Human rights have and will continue to play a vital role in the success of operationalizing the market and non-market mechanisms of Article 6, and parties need to continue to push for text that upholds environmental integrity. Guidelines for these frameworks should be strengthened, to include specific references to safeguards and limits that protect human rights, indigenous rights, and the rights of vulnerable communities.  Specific language addressing these rights must be referenced in the text, and it is not enough for these considerations to be hidden under the promotion of sustainable development. Looking into the decade ahead, countries should strive for a standardized definition of human rights, and progress should be reviewed regularly to keep parties accountable.

Discussion about safe-guards and accountability mechanisms are crucial in preventing violation of human rights by governments and corporations, in the name of carbon reduction. With the deadline for irreversible climate change fast approaching, high ambition and cooperation is needed from all parties to reach the collective 2°C goal for our planet. While negotiations should move forward at a reasonable pace, it should not come at the expense of individuals. Though human rights are technically incorporated under the umbrella of “sustainable development”, the definition for basic human rights should be respected and clearly defined under an international agreement. Moving forward, it is imperative for the rights of individuals to be taken into consideration through consultations, before implementation of projects can take place. Human rights considerations should be at the forefront of climate policy negotiations, not placed there as an afterthought. Climate action and human rights considerations are not mutually exclusive, the world simply cannot move forward if whole communities are being left behind, their fundamental rights negotiated away in the name of climate action.

BCCIC’s youth-led climate change team is supported by the RBC Foundation’s Future Launch Program. All intellectual content including omissions and errors remains the responsibility and property of the BC Council for International Cooperation.