BCCIC > What's New > The Wave > COP25 and The Escazu Agreement

COP25 and The Escazu Agreement

The Escazu Agreement is a binding regional justice system containing clear obligations that countries must follow and meet. It is first of its kind as it is legally binding, and it recognizes that indigenous human rights should be respected and incorporated into decision-making.

The Escazu Agreement calls for

I attended SB50, where countries focused on the importance of having COP25 in Chile, as it would pressure governments in Latin America to act and ratify the Escazu Agreement. Unfortunately, as COP25 concluded in Madrid, countries promised they would make their NDC’s more ambitious in 2020, but no other country managed to ratify the Agreement for COP25. This is extremely worrisome, as climate disasters are exponentially increasing but politicians continue to push important deadlines back.

Sadly, as former UN High Commissioner for Human Rights Zeid Raas Al Hussein pointed out, recent protests and violence have lead to cases of torture in Latin America and “no group is more threatened by the destruction of the Amazon rainforest, or at risk of extrajudicial killings in defense of their communities, than the indigenous people who have lived in and preserved its nature for generations.” Allowing a system to recognize the voices and the rights of Indigenous Peoples would be a huge improvement for Latin America, one that would progress climate action and protect Indigenous Peoples from ongoing violence and massacres. It is therefore crucial to continue pushing governments for action on the Escazu Agreement.

Global Witness documented 164 killings of environmental defenders in 2018. The people killed were ordinary people defending their homes, environment, and their communities from destructive industries. 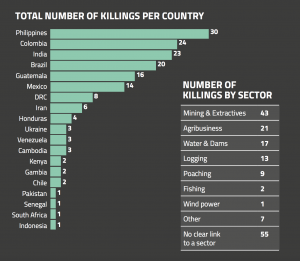 More than half of the murders in 2018 were in Latin America, making Latin America the worst affected continent since 2012, which is when Global Witness began publishing data. It is also important to consider that collecting accurate data is difficult as some countries control the press, making it difficult to collect and monitor accurate information. If you are interested in the break up and specific facts for each country please read the Global Witness report.

“Ratifying Escazú would be a tangible sign to the people of Latin America, and the wider world, that its heads of state understand the severity of the climate crisis and its intersections with poverty, discrimination, gender and human rights.”- Mary Robinson, former UN High Commissioner for Human Rights.

Robinson, M. (2019, December 12). The Escazú Agreement places human rights at the heart of tackling the climate crisis. Retrieved from https://www.theelders.org/news/escazu-agreement-places-human-rights-heart-tackling-climate-crisis

The Amazon region and its contribution to climate discussions. (2014, July 30). Retrieved from https://wwf.panda.org/?226512/The-Amazon-region-and-its-contribution-to-climate-discussions