Adrienne Ahn, BCCIC Digital Communications Volunteer, sat down to interview Dr. Leonora C. Angeles and hear her thoughts on the progress in SDG 5: Gender Equality and the points of intersection with her research. 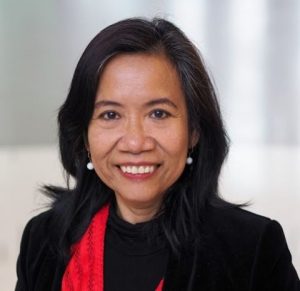 Leonora C. Angeles is cross-appointed as an Associate Professor and Admissions Chair of the University of British Columbia’s School of Community and Regional Planning Master’s Program and as an Associate Professor with the Institute of Gender, Race, Sexuality and Social Justice. In addition, she holds several other roles with the Centre for Southeast Asian Research, the Centre for Human Settlements, and the Peter Wall Institute.

With numerous accolades under her belt, it is no wonder that Angeles is regarded as a pioneer of women studies in the Philippines. Despite her accomplishments in researching transnational feminist networks, women’s movements, and participatory planning and governance, she remains humble and attributes much of her success to being at the right place at the right time.

“My Master’s thesis was on the politics of women’s movements in the Philippines at a time when it was becoming a decisive historical force in the course of Philippine national politics,” she said. “This was a time when [these women’s movements] were working with other social movements that were trying to address the excesses of the authoritarian regime under President Marcos, and the women’s organizations at the time lent its support to the democratization process in the post-Marcos period.”

The 2018 Civic Merit Award winner feels fortunate to have been able to link her academic scholarship with what was going on in the real world. Her motivation comes from social critical theorists who understood the importance of tying in research, teaching, and learning to what she calls socially relevant issues in the contemporary world.

“It keeps me grounded, but it also keeps me awake at night, because it’s more challenging than the typical expectations from academics, which is to get grants, write, and teach,” she said, adding that she has been involved in collaborative international service learning projects in the Philippines, Vietnam, and Brazil.

“Because at the time I was also doing research on women’s movements, it was natural for me to also help bring the women farmers’ perspectives on agrarian reform and some of the issues that feminist agrarian studies were already raising at the time,” she said. “You can have agrarian reform law and still be unjust towards women or further marginalized women and not recognize the very significant roles that they do in our agricultural systems.”

Back in her home country, Angeles is renowned for her contribution to the first gender training handbook published by the National Commission of the Role of Filipino Women (NCRFW). It is also not perfect, in her words, due to patterns of inclusion and exclusion that exist within institutional roles and expectations. Yet, it became one of the country’s first training handbooks to be used, and stands out as an eventful moment in her life.

In her office, stacks of relevant Gender and Sexuality, Social Movements, and Political Science books line her bookshelf, complementing her story.

“I now have—not here—in my other library, a whole shelf of what you might call gender training handbooks…one is an area of law, women in law, advocacy, domestic violence and other forms of violence against women, budgeting at the village level or in the area of gender and local governance…” she said.

While the NCRFW was pushing forward with the Training of Trainers, Angeles was focused on improving the top-down and bottom-up engagement of involved stakeholders and helped initiate the first Women’s Studies program at St. Scholastica College. At the time, the Philippines was in the spotlight of the international development aid community and Angeles wanted nothing more than to integrate women’s voices and feminist analyses of issues in collaborative projects between the non-governmental organizations and government networks.

Eventually, these experiences would shape her current definition of gender equality as linked to human rights and justice.

“It includes, for me, people who might identify with transgender identities and that’s why I like a human rights-based approach to gender equality,” she said. “It sets the foundation for the equality of opportunity and equality in treatment before the laws and program implementation, while taking into consideration the context and specificities of how those opportunities, laws, and policies are being interpreted and operationalized on the ground.”

In order to understand and work towards gender equality, Angeles emphasizes that we must address the specific economic, political, and cultural context in which gender roles, gender lived experiences, and gender-relevant ideologies are interpreted by local people.

“Even within a diverse culture or country such as the Philippines, gender equality would mean [something] contextually different from the position of lowland women depending on their occupation, whether they’re farmers, industrial workers, full-time homemakers, legal professionals, health professionals, students, street vendors or unemployed job seekers,” she said. “It’s really the intersectionality, or intersectional feminist analysis that we have been saying. Gender equality cannot be a one-size-fits-all.”

With the 2030 deadline for the UN Sustainable Development Goals (SDGs) looming closer, there is still much progress to be made on SDG 5. Although Angeles acknowledges that the SDGs have tried to address several weaknesses found in the previous Millennium Development Goals, she sees a similar pattern of mixed results happening for the SDGs currently. According to her, this could be due to evaluation practices that are not necessarily inclusive and not cognisant of the complexities of systems; thereby framing the SDGs as a mere toolkit solution.

“One is how context, as I said earlier, is so important whenever you consider why we’re having difficulty making progress on SDG 5 implementation and the context of primarily, the social, economic and political,” she said, commenting on the ongoing challenges hindering global progress. “Within the political, social and economic, we need to understand the institutional context and the institutions that shape the social, economic, and cultural context. Thirdly, we also need to understand the capacities and level of organizing, reputation, and influence that women’s organizations are at in any country that we want to analyze. Then, fourthly, to what extent do women’s organizations, along with other social and political movements within institutions view this SDG as really connected to human rights?”

Instead of a checklist, she emphasizes that gender equality should be seen as a cross-cutting goal that thoroughly interacts with the rest of the SDGs.

“We need to understand how they interact and collect data and information…to not just demonstrate the interaction but also really track down where we’re failing, which efforts are still lacking, where we can do better, and how these interactions are really playing out on the ground,” she said, referring to how the SDGs can be better interpreted.

On the subject of a human rights-based approach to achieving these goals, Angeles shared that one person’s words comes to mind.

“Essentially Gita Sen put it this way: ‘No equality without rights and no rights without politics,” she said.

Angeles echoes the feminist scholar’s sentiments, primarily because she knows that we cannot think about equality without consideration for the stakeholders who will actually push governments and civil society to implement SDG 5. Aware that these goals are humanly-devised social constructions, she raised the question of what would ensue if the small gains of the poor and middle class over the years in a post-war liberal democratic order were to be dismantled by only a few powerful individuals.

“That is why, in a way, the SDGs are not seen by many as relevant unless you have governments and democratic political systems that really want to champion addressing social inequalities and economic injustices in society, and ergo class inequalities and class differences as well,” she said.

Although the likelihood of all countries achieving SDG 5 are shaped by multiple conflicting dynamics, Angeles is hopeful for the future of women’s empowerment. Bringing up the emergence of the Me Too Movement as an example, she believes that the young generation has a large role to play in order to mitigate any potential of historical amnesia. Part of their role, she believes, will be to understand the history, struggles, and the challenges that generations of feminist advocates and social justice warriors had to sacrifice to bring us to where we are now.

“For me, I’m hopeful when I see that people are going to be constantly vigilant. That we cannot simply sit on the gains of the past, but really always try to cultivate. It’s almost like if all these historical gains are the fruits that you’d like to harvest, you’d have to look at the soil on which your crops are planted. And to ensure that just like when you want to have a good crop and you want to have healthy plants and healthy trees, you need to constantly rejuvenate the soil. That rejuvenation happens only when we are in constant dialogue and engagement with like-minded people, and really try to counter forces that want to push us back to the Dark Ages and really put time, effort, and energy into ensuring that our land and our crops are healthy,” she said. “[We have to] get all those toxic elements out of our soil.”