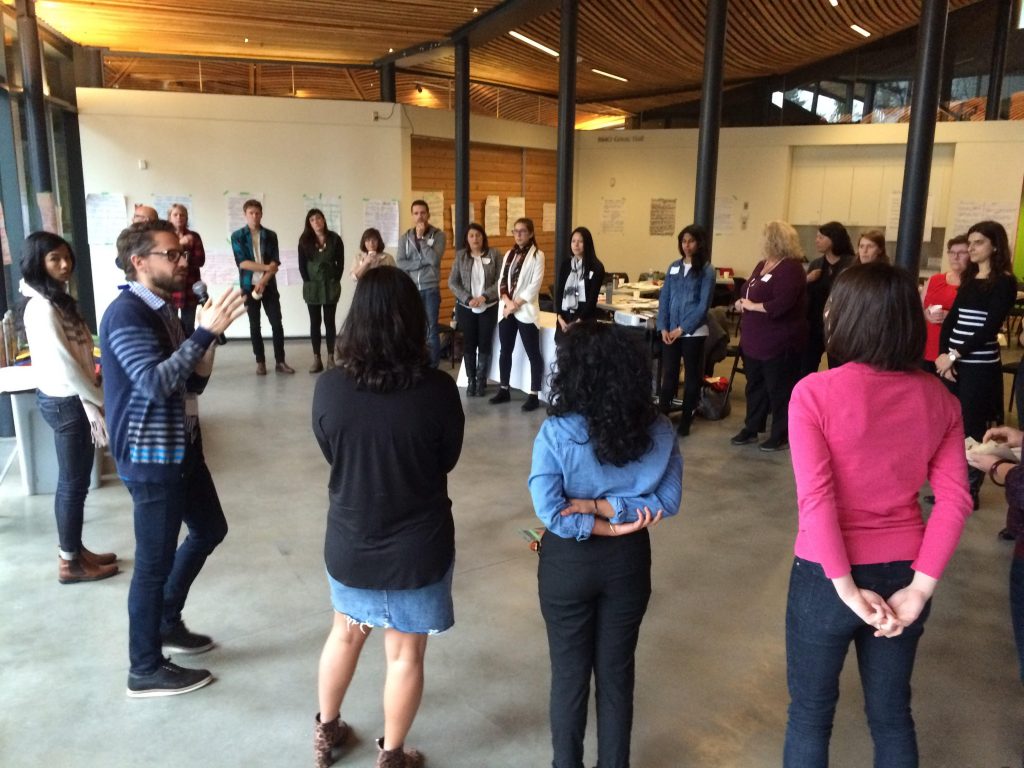 Written by Diane Connors, BCCIC Communications Officer
Edited by Vincenza Nazzari, Equitas Director of Education
This article describes some of the learnings and interactions during a 2-day workshop in Vancouver in March 2018 on the topic of a Human Rights Based Approach (HRBA) in development.

“I’ve had a big shift in my thinking,” one participant said; “a human rights based approach is a sustainable way to do development. Human rights adds “teeth” to what you are doing to support the Sustainable Development Goals,” added another, as we went around the room hearing from the nearly 30 people gathered on a rainy Vancouver morning.

Chart paper was hung up all over the meeting space, the different handwriting showing people’s ideas on display. A wall with everyone’s names and areas of focus showed diversity in development interests – from education, to networking, to health, to immigration – the knowledge and experience spanned all over Canada and the world. “When you study or learn something, it changes your perspective permanently. I hope this changes my work going forward” another person offered. “I realized that human rights are at the foundation of the work we are doing” came another affirmation.

This group of people came together to participate in the 2-day workshop, “Implementing a human rights-based approach” – coming from as far away as Halifax and Whitehorse, and as close as Kelowna, Victoria, and the Vancouver area. The participants formed a large circle, reflecting on the day before where they had a whirlwind introduction to United Nations human rights system, as well as the standards and mechanisms, and then applied their new knowledge to some case studies.

Several people spoke to how they were impacted by a case study from Action Aid’s “People’s Action in Practice” which illustrated the differing results between using a “needs-based approach” to development and a “human rights-based approach”. The example focused on actions aimed at improving children’s access to education with an expenditure of £20. In a “needs-based approach”, the £20 could be used to purchase a part of a uniform for one child to go to school in Kenya. Using a human rights-based approach would involve identifying the human rights issues, drilling down to root causes and identifying actions leading to more sustainable results. Adopting a human rights-based approach in this case, therefore saw the £20 used to pay for the travel costs of two children to go speak to the national parliament in Kenya. This resulted in the education minister writing to 17,800 primary schools to say that lack of uniforms should not prevent access to school.

This case study embodied the “5 elements of a human rights based approach,” which can be remembered with the acronym PANEL: Participation, Accountability, Non-Discrimination and equality, Empowerment, and Links to human rights. The case study also demonstrated another concept introduced that day – the idea of seeing the roles of “rights holders” (the children) and “duty bearers” (the NGO, the government) in acting to affirm and protect human rights. Many people nodded their heads and murmured agreement when the example was brought up as an effective demonstration of a human rights-based approach.

Laughter and chatter filled the high-ceilinged room as people gathered at tables in small groups to work through another case study. During the debrief a question came up – “How come it often seems like companies have more rights than communities?”

A discussion followed with input from around the room – “Companies don’t have human rights, and they don’t have more rights than people – they just often have more power to influence politicians and the legal system.”

“But don’t human rights trump all other rights?”

“Yes, they’re supposed to. That’s why it’s important that we integrate a human rights based approach in our work, to strengthen and legitimize these human rights frameworks so that separate legal systems will recognize them.”

Through the day, the workshop participants analyzed their own projects to practice integrating a human rights-based approach. Asking questions like: who is ultimately responsible for upholding the rights of the people meant to benefit from the project? (Usually their government). What UN treaties or other legal obligations has the country in question signed onto that could be used as an entry point for upholding human rights? (There are often many). Who should be participating in consultations about development projects that interlock with human rights? (Usually the people who the project is meant to help).

Human rights are protected through United Nations treaties that governments have ratified and incorporated into their domestic legislation. These are powerful moral and diplomatic tools for improving people’s lives. Not all UN documents are legally binding, but there are enough with domestic legal ties to help keep governments and other duty bearers accountable to people and communities. This accountability seems to be the main goal of a human rights based approach.

“I used to think that doing human rights work meant you kicked down doors yelling “human rights!”” a young man said to the chuckling room, “but I’m seeing now that it can be a slow and methodical process. It can be a side by side thing. You can keep doing your projects, but at the same time work on the human rights aspect.”

An important note came up in the last case study of the day. “You have to remember to account for what’s going to happen after people are trained to know and claim their rights.” Will they need to go to court? How will you support people to realize their rights once they know what they are? Having a network of support is important – being able to provide channels for legal support to organizations for example. “In working together with other organizations we’re able to address different aspects of human rights issues.”

As people worked through the last parts of the workshop they spoke easily to each other, discussing their ideas with new vocabulary, and building on each other’s comments. As the day came to a close something hopeful said at the beginning of the day became apparent: “In many cases, we are all already doing much of this work” – and a human rights-based approach will enable more sustainable results, now and into the future.

BCCIC Organizations that participated in this workshop included:

Society For the Love of Africa