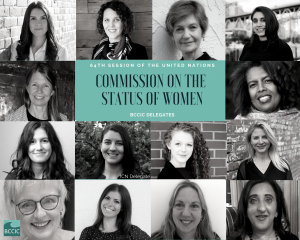 Please note: Since the posting of this press release, the 64th session of the United Nations Commission on the Status of Women (CSW64) has been cancelled as a precautionary measure due to the COVID-19 outbreak.

Vancouver, BC — March 3, 2020 — The British Columbia Council for International Cooperation (BCCIC) today announced it will send 14 women from British Columbia to New York this month for the 64th session of the United Nations Commission on the Status of Women (CSW64), which marks the 25th anniversary of the Beijing Declaration and Platform for Action (1995).

Members of the BCCIC delegation work on many of the varied and complex gender issues that are front of mind for British Columbians. These include equity in the workplace, violence against women, Indigenous rights, the intersection of gender with race, disability, and generation, the role of women in climate action, the gendered issues related to addiction and treatment, the pervasive stereotypes of caregiving work, gender equality in city design and the built environment, gender and international development, and more.

“I am honoured and excited to be attending CSW64 with a group of strong, dynamic women,” says Anu Pala, delegate with BCCIC. “I look forward to sharing and learning, as well as having the opportunity to bring to light the issues that matter most to me: promoting the abilities of women living with disabilities, as well as addressing gender-based violence. As a woman of colour living with vision loss, I am among many who carry unique and diverse lived and learned experiences on this delegation.”

The delegation will release a series of case studies focusing on gender equality and women’s empowerment projects in a report on International Women’s Day. Dr. Zosa De Sas Kropiwnicki-Gruber, BCCIC’s Senior Policy Analyst and head of this year’s delegation to CSW64, explains that these case studies are a chance to showcase some of the work being done by British Columbians within BCCIC’s network, both at home and abroad, to advance gender equality and women’s empowerment.

“This delegation is the largest we’ve sent to CSW64,” says Dr. De Sas Kropiwnicki-Gruber, “It’s an important year to reflect on the progress that’s been made twenty five years since the Beijing Declaration, while also looking forward to all that remains to be done to accomplish the 2030 Agenda for Sustainable Development. As our Executive Director writes in the Foreword to these case studies, ‘Gender equality – SDG5 – interlinks in a major way with all other areas of the Agenda; it can greatly ameliorate issues or exacerbate them if unaddressed.’”

All but one delegate were selected from BCCIC’s membership, and represent either the BCCIC staff and board or its members. One youth delegate was selected by the BCCIC to represent British Columbia on the Inter-Council Networks’ (ICN) youth delegation. CSW64 runs from March 9 to 20, 2020 at UN Headquarters in New York.

For more information or to arrange interviews, please contact: