All things are connected. Like a web we do not see. Every drop of water, every inch of soil, every breath a woman takes and every child who walks the earth is a strand in the web of life. In the stirring speech attributed to Chief Seattle, we read:

In the age of reason, we barely use words of sanctity and mystery. Yet the yearning to protect life and its harmony is still in us. We realize now that the collapse of the bee colonies, the shivering of lives in hunger, thirst, exploitation and violence and the unceasing appetite to conquer the world and its people, cannot possibly mean well for any of us. We are beginning to see the connections with more resolution.

In 2015, the United Nations had an assembly to conclude a series of conversations about the future of the world, and how we want the world look like by 2030.

The 2030 vision, declared as 17 global goals, is expected to be developed and acted on by communities as well as governments at all levels.

Perhaps the most important thing about the declaration of the global goals, is that it is an open space. Although there are official guidelines on how to implement the agenda, new conversations have been started through the Sustainable Development Goals or SDGs.

The new conversation is that the goals are interconnected. That economic growth, social inclusion and environmental protection are not separable. That climate change is real and maybe a manifestation of all that is wrong with the world.

It is possible to draw, from the interconnectedness of the goals, that climate will not go back to normal unless we consume and produce responsibly. Ethical and eco-friendly consumption empowers millions of young women all around the world by providing decent jobs for them so they can educate their children and buy food, shelter and medicine. Ethical/Eco consumption is also linked to fresh water, oceans, biodiversity, forests, and desertification. It might be interesting to know for example that the clothing/fashion industry  is the second polluter of the planet after the oil industry.

There are many more connections that can be drawn from the vision. Seeing the possibility of transformation is an act of courage and imagination and it is believed that “in and through community lies the salvation of the world.”

There are volumes written on how social change happens. Without trying to dive into the topic in any depth, let us only mention that what is present in most stories of lasting improvement and change, is the tale of a core group of people discovering and building their own power to act. Large scale transformation then occurs when enough small groups shift in harmony toward the larger change.

In convening people for change we need to be able to answer:

Once in the room, we need an understanding of our capacity, expertise, and financial resources that an alternative future requires before we can strategize for action.

In asking these questions we are inquiring into human systems; and in a digitally immersed world, where a growing number of interactions and associations happen online, at least part of the answers is to be found on the digital web.

In 2015, and after the launch of the SDGs, the British Columbia Council for International Cooperation set out to learn how organizations in BC were reacting to the new goals, and to gain understanding of who was already implementing and advancing them. BCCIC is a network of international development and civil society organizations that has been engaged in sustainable development and social justice issues for over a quarter century. They knew the subject matter global goals dealt with was nothing new and that groups across Canada have been working on these issues for decades.

BCCIC hosted conversations in over 30 communities across BC. Through this ground-truthing work more than 2000 organizations were identified and their focus was examined in terms of the SDGs. The account of BCCIC’s civil society listening tour is detailed in the Invisible Mosaic Report. The term Invisible Mosaic, we read in the report, was brought forward in one of the roundtables in Victoria to describe the emerging myriad of groups already working on the SDGs whose efforts remain largely unknown to the public, politicians and even many of the organizations themselves.

To reveal the Mosaic, BCCIC developed an online searchable map which locates the organizations and specifies the work they are doing. After receiving a list of organizations on this map from BCCIC, I set out to harvest the connections between these organizations from the web.

The following, shows a social network of over 1800 non-governmental organizations and institutions in British Columbia. Each circle/node/entity represents one of the organizations, and each line/link/relation between two organizations indicates that there has been at least one (hyper-)link from one organization’s website to the other’s.

The node in the middle is BCCIC, and as we can see, the network consists of a main (connected) component on the right side of the picture and a rather large number of individual organizations on the left side which are clearly disconnected from the rest. They are, however, in the picture because the BCCIC map links to their websites.

We were curious as why there is such a clear disconnection (at least on the web) and we found out that on average, groups and organizations that are disconnected from the rest have about 58 pages on their websites. Whereas those organizations that are part of the main network have 405 pages. Should an organization then try to build bigger websites and produce more content on the web to appear more connected and be more successful? Hardly so. The best strategy is to learn how to build meaningful and lasting connections to other people within organizations who are doing similar work and deal with the same challenges. That’s why one of the global goals is “Partnerships for the goals”.

If we focus on the main connected part, we are able to detect 10 distinct cohesive subgroups or communities in the network. The algorithms that can discern communities in a social network, are designed based on the principles of strong and weak ties. The following visualization shows the detected communities and how they are related to the global goals.

Each community is identified by a unique color. It is suspected from this visualization, that most communities cluster around a shared set of goals. Remember that the communities here are based on online relations that may or may not reflect real-life partnerships and collaborations; however, the observed homophily is interesting. The word “homophily” comes from the Ancient Greek “homou” meaning “together”, and the Greek word “philia” meaning “friendship”. Homophily describes the wildly observed tendency of individuals and groups to bond and associate with similar others. This tendency can be leveraged to produce tolerance and cooperation, and help people access information and form opinions; all of which are required in the work of social change.

The positioning of the goals in the network also hint at the interconnected nature of the goals. Look for example at goals 14 (Life Below Water) and 15 (Life on Land) at the right side of the picture above. We know that the world’s oceans—their temperature, chemistry, currents and life—drive global systems that make the Earth habitable for humankind. To observe this relationship emerge from the data is therefore very interesting. It seems like organizations who are cognizant to the life below water are also aware of life on land. In fact if we churn some numbers and calculate the correlation of the SDGs in this network, we observe three distinct sets of goals that are significantly associated:

The Most Linked-to Organizations

Let’s go back to the initial social network which did not include the goals. The main connected part of the social network, depicted below, includes 1226 organizations which are connected through 5600 online links. The size of the nodes reflect the number of links an organization’s website receives from other organizations in the network. The top 10 most linked-to organizations are identified and links are removed for clarity:

While it is interesting to know what organizations are linked to the most, the number of links shouldn’t be taken as a measure of how important, engaged or influential an organization is. Context is always decisive and the number of links a website receives is affected by many factors. It is quite understandable that academia and well-known funding organizations are frequently linked to by other organizations. We are however interested to study various kinds of positions an organization can have in a network; because different positions in a social network offer different benefits and call for different actions.

Bridges in social networks have the same function as bridges in real life cities and villages. Bridges connect different areas together. They often provide shorter routes from one place to another. And so the technical definition of a bridge in a social network is a node from which many shortest paths travel. If you remove a bridge, the paths between nodes will become longer, or some nodes might get totally disconnected, meaning there would remain no path to reach from one to the other.

In analyzing bridges versus non-bridges we learn that not all bridges are highly linked-to. Instead bridge organizations have more diverse connections and a higher percentage of reciprocal relationships. When bridges link to a peer, the peer links back in 17% of cases. Non-bridges have an almost 0% reciprocity rate.

Bridges are special because they potentially have the advantage of being engaged in different discussions and have access to a variety of information, expertise and resources.

Links on the web are reputational indicators. It is very common for websites to link to many other websites but it is relatively rare for them to get a link back in return! A mutual linking between two organizations might suggest that the two organizations are somehow engaged. That the people involved in these groups might in fact know each other and collaborate in the real world, or have other reasons to reciprocate the online link. Either way, a mutual link is more informative than a one-directional link.

In this network, only 32% of the organizations have a mutual connection to another organization. The following visualization shows mutual relationship within and across the ten communities we saw before.

If we further exclude from this picture the organizations that are not mutually connected to any other organization, we will be able to detect a new set of cohesive subgroups which we call core groups. There are 68 core groups in the network ranging in size 2 to 29:

Earlier in the article we talked about the required ingredients for successful and sustainable change and the questions that come up during the process of community building: Who is around? Who should be in the room? What is the new conversation we want to have? Networks can aid us in exploring these complexities. Networks offer a way to see and understand social structures and as such, they can facilitate and focus our conversations about what needs to be done. 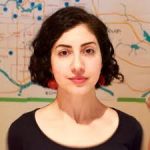 Maryam is a data scientist and storyteller who has been collaborating with BCCIC since August 2017, researching the connections among groups and organizations in British Columbia, who are part of the movement towards a sustainable future. She believes technology can enable us to understand and alleviate our (currently broken) relationship with nature and people. Learn more about Maryam’s work and follow her updates on her Medium page.